The Scale of the Manhattan Project 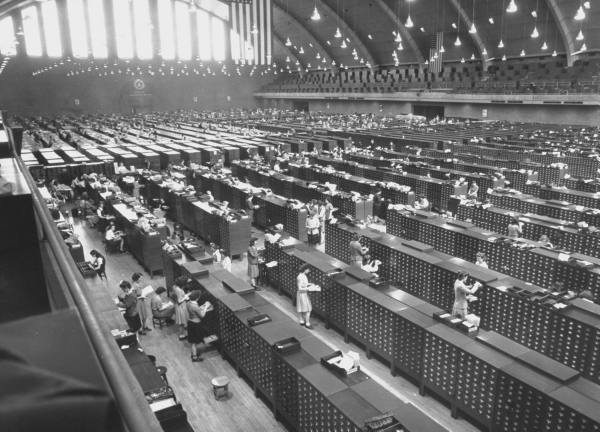 The Magnitude of the Manhattan Project

The Manhattan Project is not only a fascinating success story due to its direct result of producing the first nuclear weapons; it was also impressive for its massive scale. The project was a major source of employment, just as the nation was recovering from the Great Depression. Over its course, it employed more than 600,000 people (this is partially due to a high turnover rate), with 125,310 active employees at its peak (just 22 months after the project began). Given these stats, the background and security clearances for new hires alone was a substantial undertaking – especially without computers. The volume of military background investigations that the FBI handled was so high that they turned the DC Armory (a multi-purpose sports arena which is still in existence), into a temporary filing facility.

Early into the project, the FBI was adding 400,000 file cards a
month to its archives. By 1944, the agency contained millions of file cards and fingerprint records. The project also cost over $2 billion, which may not sound like much at first. However, that’s about $23 billion today. As a side note, the amount the US spent fighting WWII equates to over $4 trillion in today’s currency! For those who are still unimpressed by these statistics, there is one last component that puts this project on another level: the secrecy. The idea of such a large-scale project remaining a secret over several years is both incredible and somewhat unnerving, if you imagine what secret operations may currently be under way.