Learn About the Nevada Test Site 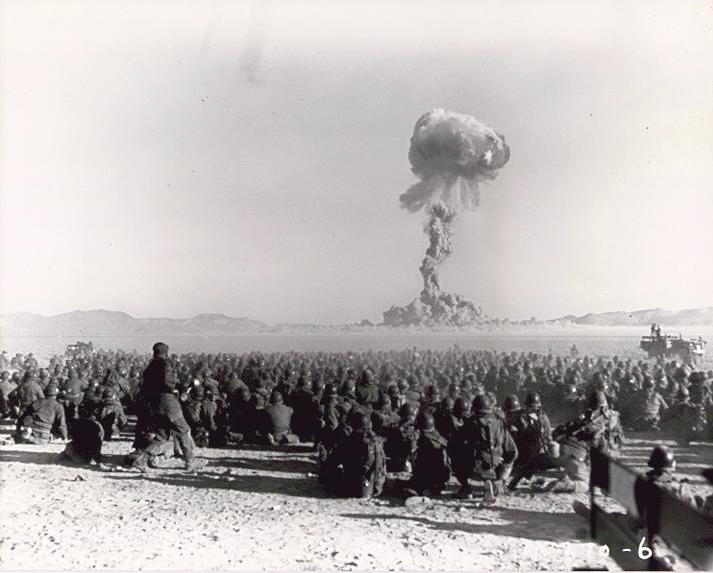 Operation Buster-Jangle, the first U.S. nuclear field test conducted with live troops only 6 miles from the blast at the Nevada Test Site.
The Nevada Test Site has a dense history that begins on December 18, 1950 when President Harry Truman authorized what was then called the “Nevada Proving Ground.” It wasn’t until 1955 that the site’s name was changed to “Nevada Testing Site,” and more land was acquired sporadically until the year 2000. It now spans around 1,360-square-miles, larger than the state of Rhode Island. It is no longer used as a nuclear testing site, however, it is still used by the U.S. for national security needs.
The tests performed here serve many purposes but are mainly completed to see how the old and new weapons perform. One of the most discussed series of tests was called “Operation Plumbbob.” This was a series of 29 nuclear tests completed by our military. This process exposed a significant amount of civilians to radiation. The effect of nuclear fallout on the environment was also unknown. The potential health effects of this exposure was a cause for concern, leading President Kennedy to sign the Nuclear Test Ban Treaty along with the United Kingdom and the Soviet Union in 1963. After 100 above-ground nuclear tests were completed, the treaty prevented any more testing in the atmosphere, underwater, or in space.

Underground testing at the Nevada Test Site, photo from onlinenevada.org

This led to underground testing becoming more common, especially at the Nevada Test Site, where 828 underground tests have been completed. Operation Julin was the last group of tests at the Nevada Testing Site. It was a group of 7 nuclear tests completed and the last before the Comprehensive Nuclear Test Ban Treaty was signed, prohibiting nuclear weapon test explosions.