During the early twentieth century, thousands of workers employed in the U.S. nuclear weapons industry were exposed to harmful chemicals, toxins, and heavy metals with high levels of radiation as a part of their jobs. To help compensate workers who were injured as a result of their exposure, the federal government created The Energy Employees Occupational Illness Compensation Program Act (EEOICPA).

The EEOICPA only compensates nuclear weapons workers who were employed by the Department of Energy (DOE) after 1941 and became ill as a result of exposure to harmful chemicals at work. Eligible individuals can obtain lump-sum payments and health benefits if they satisfy a specific set of criteria. Possible beneficiaries include current employees, former employees, contractors, and subcontractors.

If a worker is deceased, his or her surviving family members may also be able to receive compensation. The EEOICPA is made up of two benefit programs, known as Part B and Part E. Under Part B, employees or their survivors can receive a lump-sum payment of up to $150,000 and reimbursement for full medical expenses. Beneficiaries under Part E can receive the even larger sum of $250,000. Additionally, those who qualify under the Radiation Exposure Compensation Act (RECA) may be eligible to receive the smaller sum of $50,000.

Only workers who satisfy certain requirements can obtain compensation under the EEOICPA. In order to qualify, an applicant must have been diagnosed with cancer or another illness caused by chemicals and have worked at a covered DOE facility. Specifically, an employee must have sustained a on of the following diseases while employed by the DOE, an atomic weapons employer, or a beryllium vendor:

The surviving family members of a deceased worker can also file a claim on that person’s behalf. However, the definition of survivor differs depending on whether a claimant is filing under Part B or Part E. Under Part B, survivors can include any of the following individuals:

The definition of a survivor is more restricted under Part E, which only covers:

Eligible parties may also be able to obtain compensation for illnesses caused by radiation exposure under the Radiation Exposure Compensation Act (RECA), which compensates uranium miners, millers, ore transporters, or their beneficiaries for certain diseases. This program also covers individuals who lived downwind of nuclear testing locations and nuclear-test participants.

Although nothing can replace a loved one lost as a result of exposure to radiation or toxic chemicals, obtaining compensation can go a long way towards helping families avoid the additional stresses caused by unpaid bills and mounting medical debts.

Listen to our clients as they share their experiences in working with United Energy Workers Healthcare.

“Who would have ever thought you could stay at home and be a care giver and still get money.”

Do you have this card? 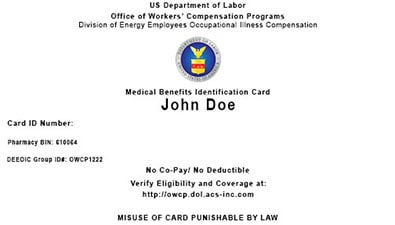 If you already have this card, then you are already approved to receive no-cost medical benefits! Call us to get started today.

In order to be eligible for EEOICPA/RECA benefits, an individual must have been employed at a covered Department of Energy facility, an approved atomic weapons facility, or at a permitted beryllium vendor. An individual must also have one of the covered conditions as a result of exposure to radiation, beryllium, or silica while employed at an accepted facility. In addition, uranium miners, millers, and ore transporters are eligible for benefits if they develop an illness as a result of exposure to toxic substances (such as radiation, chemicals, solvents, acids, and metals) and worked at a facility covered under RECA. Eligibility requirements vary by location and condition.